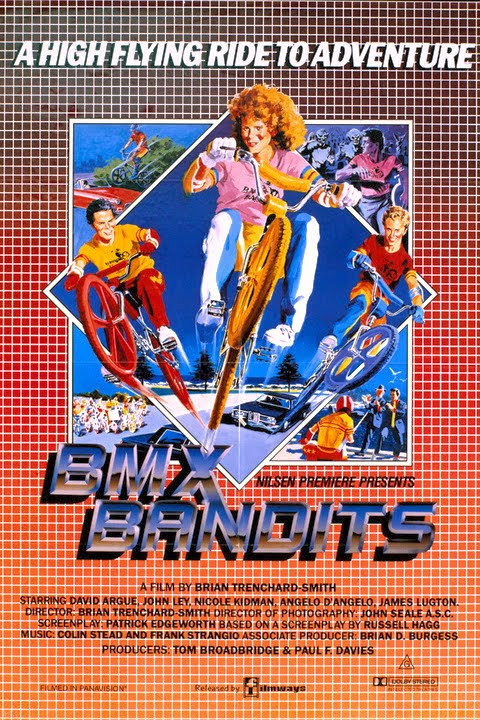 The term cult classic is surely overused but this film must be in with a shout of being the genuine article.  Before Nicole Kidman took up a career cavorting with stuffed meerkats she used to be an actress and before she was famous she made her debut in this 80’s romp of kitsch and colour, set to the tune of an 80s synth soundtrack which maintains a buzzing energy throughout.

The film is perhaps a classic episode of Scooby Doo brought to life with the pesky kids taking on the villains and winning as they whizz around Sydney on BMX bikes careering through through various locations via a close up montage of helmets, kneepads, wristbands and pedals.

It was shot by Australian cinematographer John Seale, who went on to win an Oscar in 1996 for his work on a very different film: The English Patient. Low angle shots of cars, bikes, tracks, pavement, tyres gives the film a whooshing immediacy. While director Trenchard-Smith plays with the idea of kids as both problems and solutions.

BMX Bandits is a splash of brightly coloured, family fun mayhem.  Relive the 80’s with tales of your bunny hopping badness.  This film also of course gave it’s name to another cult classic – the indie band of the same name.

Cost: £5 (tickets can be bought via the eventbrite link opposite)