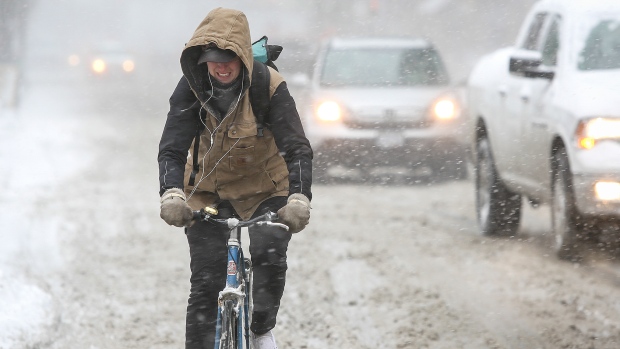 I’m sitting writing this as snow lays on the ground in March after the ‘Beast from the East’ has blanketed Britain and made transport somewhat tricky.  I’m not a fair weather cyclist as such but I certainly have ridden less this winter than normal.  Sometimes I find it easy to summon my Flandrian spirit and head out but often I find other methods of getting to work.  I don’t generally mind the weather if heading out on the mountain bike but commuting is a different beast altogether.

I therefore thought, as we hopefully head for a thaw, that it was a good time to show A Winter of Cyclists, a film that will help me (and hopefully you) reflect on your cycling and gain some inspiration from people who ride where it’s seriously cold.  The documentary film chronicles a group of Colorado participants as they attempt to complete a 52-day winter cycling commuting challenge created by Scot Stucky.

The challenge, known as “The Icy Bike Winter Commuting Challenge”, was created to encourage people to cycle to work from October to March, during the darker, colder and the snowier months of the year.

The film captures the wide diversity in which riders adapt to new commuting logistics, adverse weather conditions and riding in the dark. The Colorado riders encounter  unexpected solidarity across the American continent and into Europe via Facebook,  providing a glimpse into a broader global winter cycling community by the end of the challenge more than 150 participants from around the world had joined the Icy Bike Winter Commuting Challenge.

Join us (hopefully thermals not required) and be inspired and as we head for spring reflect back on the your winter riding and what it might hold for you next year.

Cost: £5 in advance (tickets can be bought via the Eventbrite link opposite and ticket price includes Eventbrite fee).