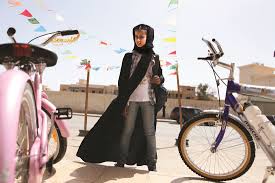 The first two film nights have been a great success I think, both events sold out and people have really seemed to enjoy themselves which is what it’s all about.  The third film night brings a very special film Wadjda and this is really not one to be missed.

Susan Brownwell Anthony was a prominent civial rights leader and campaigner to secure women’s suffrage in the United States who once said  “Let me tell you what I think of bicycling. I think it has done more to emancipate women than anything else in the world. It gives women a feeling of freedom and self-reliance. I stand and rejoice every time I see a woman ride by on a wheel…the picture of free, untrammeled womanhood.”  How relevant is this quote today in parts of the world were universal suffrage has not been acheived ?

The film Wadjda is a film of firsts, a funny romantic comedy set in Saudi Arabia.  It’s the first feature film shot entirely in Saudi Arabia and the first feature film to be made by a female Saudi filmaker in a country where cinemas are banned and women cannot drive or vote.  It tells the story of a young ten year old girl (Wadjda) determined to raise enough money to buy a bike to race her friend Abdullah in a society that sees bicycles as dangerous to a girl’s virtue.  In order to try to raise the money Wadjda enters a Qur’an reading competition at school which offers her the chance to win the money for the bike. So she acts the model student and gets her head in the book. The real reason for her new-found interest in devout study is kept secret.

Wadjda is a film about working for change under the radar, with small victories and shows there are subtle ways to attack injustice.  Director Haifaa Al-Mansour criticism of her country is delivered inside a love letter to her people and to custom and this approach like Wadjda’s in the film is perhaps the way change happens as the film’s nomination as Saudi Arabia’s 2013 Oscar contender is arguably an implicit nod of approval from the country’s mainstream.

Tickets: £5 (plus eventbrite admin fee) in advance via the eventbrite link opposite